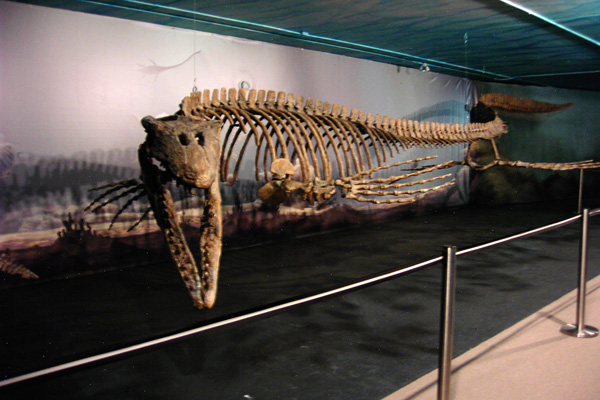 Bruce and Suzy – A Romantic Fan-fiction About Two Mosasaurs

We travelled back in time to the Cretaceous period. The time during when massive marine reptiles swam the lengths of our underwater province until their extinction around 80 million years ago.

The Canadian Fossil Discovery Centre (CFDC) holds Bruce, a Tylosaurus Pembinensis which was discovered near Thornhill, Manitoba. Seventy per cent of his body was found intact, which is incredibly rare, making his discovery a huge victory in the Palaeontology world. The CFDC also holds Suzy, another Mosasaur which was also found near Thornhill in 1977.

After exploring the museum, we were led to a room where these two boney giants are held. On one side of the room you see Bruce. On the other, Suzy. They spend their eternal afterlives just meters apart. Close, but never together.

This is the story between two ordinary Mosasaurs who loved each other.

Years ago, in the depths of the sea, lived a young mosasaur. This Tylosaurus Pembinesis was beautiful and delicate. She could move gracefully through the water and could swiftly snatch up prey, all while looking perfect and pristine. This was Bruce and she lived with her family, the most powerful Tylosaurus Pembinesises in the sea.

This family was strong and powerful, and well-known throughout the mosasaur community. But, Bruce was different from her family. They were strong and aggressive. They attacked their prey head-on. Bruce preferred to hide in the shadows and pounce, as she was less strong but far more agile. Her hunting style separated her from her brothers and sisters, who looked down on her and believed that she wasn’t a true Tylosaurus Pembinesis. Feeling distant from her family, Bruce often spent hours upon hours trying to prove herself by always hunting, resulting in her always being physically and emotionally exhausted.

After one fateful argument with her family, Bruce had had enough. She swam far away. It was the first time she had ventured that far on her own.

Without realizing, Bruce travelled straight into the den of another family of Mosasaurs. Yellow eyes glowed in the dark as Bruce disturbed a deep sleep. Figures emerged from the shadows. They were similar to Bruce, but with slight differences. These were not Tylosaurus Pembinsises like she was, they were some other type of mosasaur.

These were angry mosasaurs. They approached Bruce, who cowered in fear. In an instant, they were attacking.This family was vicious  and all Bruce could do was thrash and attempt to escape.

All of a sudden, there was a loud shriek, and a smaller, handsome mosasaur of the same family emerged. He hadn’t participated in the attack on Bruce. His call disrupted the others. The vicious family stopped and stood still, shocked.

This was Suzy. When he saw what his family was doing to Bruce, he was disgusted. Suzy swam in front of Bruce, protecting her.

Suzy’s family felt betrayed. He was defending a stranger. But, Bruce looked into Suzy’s eyes and they instantly connected. They fell into a deep love.

But, the vicious family resumed their attack. Bruce stood there shocked, conflicted. Should she defend her new love or to use this moment to escape?

Suzy shrieked, and Bruce felt his pain. One of Suzy’s brothers came in for the final blow. Bruce dashed in front of him, saving her saviour.

Suzy watched as Bruce fell to the sea floor, limp. He cried out in distress. He didn’t fight back as his family continued its attack. All he wanted was to be with his beautiful Bruce. After a moment, he fell too. Down to the sea floor, his body metres away from Bruce’s.

Thousands of years later, they are still only a few metres away from each other. Their skeletons hang in the Canadian Fossil Discovery Centre. They can see each other, but they will never be able to truly be together…